Recently released Patch Tuesday Update KB4565503 for Windows 10 May 2020 Update version 2014 is repeatedly failing to install for some users. Microsoft is aware of this issue.

On July 14, Microsoft released Cumulative Update OS build 19041.388 for the Month of July. The update has addressed several issues. For instance, it resolves Isass.exe failing with error code c0000008. 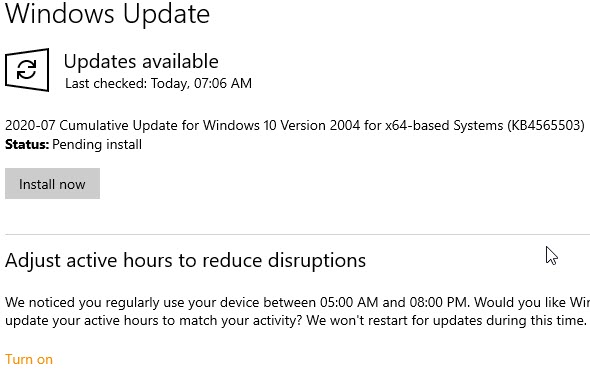 According to reports [1] [2] [3] [4] on Microsoft Support forums, for some users, Windows Update installs the July update and then removes it and rolls back the user to the previous build.

Another affected user says update downloads and installs in a continuous loop and never completes.

Microsoft employee, Jenny Feng in a couple of threads [1] [2] said they’re aware of the issue and suggested some workarounds.

“We have noticed some users are reporting the same issue with yours”.

Have you got some error code during installation?
What’s the detailed error message?

You could check the following article to fix windows update errors:
https://support.microsoft.com/en-us/help/10164/fix-windows-update-errors

We have noticed some users are reporting the same issue with yours.

If the common troubleshooting doesn’t help.
Some users reported manually downloading and updating Windows 10 from build 19041.329 to build 19041.388 could solve this issue.

From the WinX Menu, open Command Prompt (Admin). Type the following one after the other and hit Enter:

net stop wuauserv
net stop bits
Next browse to the C:\Windows\SoftwareDistribution folder and delete all the files and folders inside. Press Ctrl+A to Select All and then Delete.

After you have emptied this folder, you may restart your computer or you may type the following commands one at a time in the CMD, and hit Enter to restart the Windows Update related Services.
net start wuauserv
net start bits
Run Windows Update again and see.
You will be able to download and install the updates successfully. Once done, you will see that a restart has also been scheduled.

If that doesn’t work, the update assistant can help you update to the latest version.
https://www.microsoft.com/en-in/software-download/windows10

The July CU has also reportedly removed Notepad and Paint for some users.