Mozilla has now included the “Fingerprinters” option in the Standard mode of Enhanced tracking Protection in Firefox 72 Nightly, with the standard content blocking mode enabled by default, users will be protected against fingerprinting scripts when they surf the web. Firefox 72 is scheduled to release on January 7th, 2020. 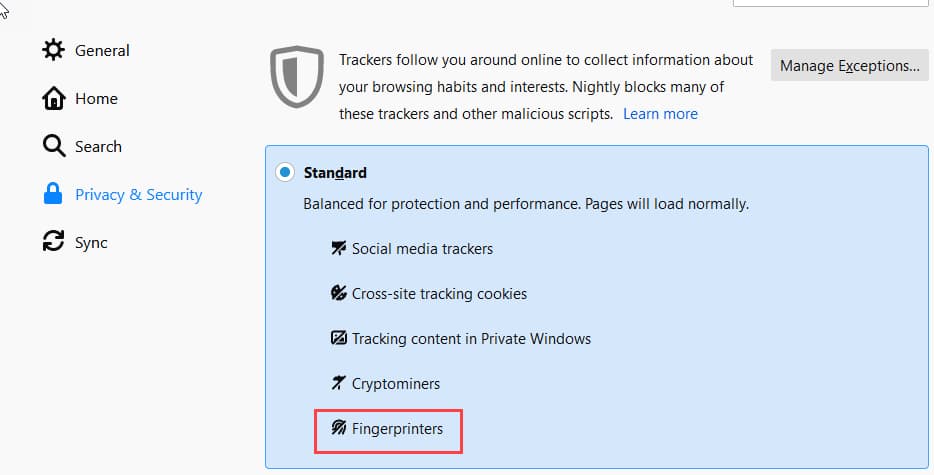 Some websites can frame a picture of you based on your system configuration, screen resolution, the browser you use, fonts installed, this is called fingerprinting and Firefox can protect against such scripts with Enhanced Tracking Protection when you choose Strict or when you enable Fingerprinters in custom mode.

Mozilla has been testing to provide protections against cryptominers and fingerprinting scripts where the former mines cryptocurrency by using your CPU where the latter are the invisible scripts embedded in webpages that harvest the snapshot of your computer configuration to create a digital fingerprint which can be used to track you. That’s why Mozilla has included fingerprinting in Firefox’s anti-track policy.

Till now Fingerprinting protection is available as an option in Firefox Privacy and Security Settings, today, Mozilla has gone ahead and placed it into the Standard section to protect Nightly users by default.

Do note enabling the feature may break some websites and appear strange with different layout, to figure out and to avoid this from happening Mozilla will conduct tests in the future, based on the outcome, fingerprinting protection may ship with Firefox 72 stable or remains optional for enabling in custom and strict modes as it is now in the release channel.

Enable and test Fingerprinting and Cryptomining Protections in Firefox browser