With every new Firefox release, we hear complaints from Avast/AVG antivirus users that their Firefox is having some issue, Firefox 68 release is no different. Apparently, some users reported that their Firefox not able to start after launching, it appears with a blank window with minimize and maximize buttons, when users uninstall AVG or Avast, Firefox opens normally and has no other issues.

Mozilla is aware of this and suspecting this has something to do with launcher processed they’ve enabled for release users in Firefox v68. 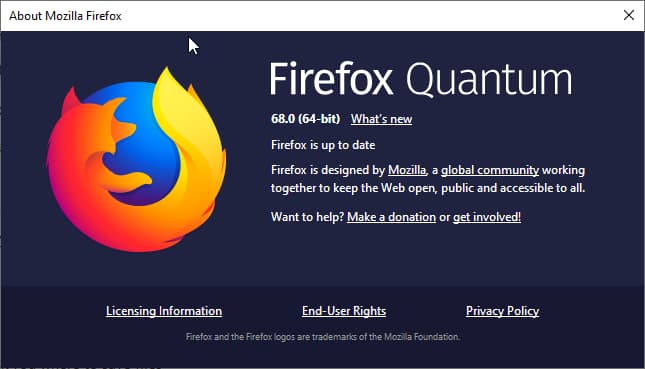 Firefox users running version 68 on Windows 7 with latest Avast or AVG free antivirus noticing Firefox is hanging on startup when launched. Users are not able to end Firefox by killing its process in Task Manager, as it shows familiar “Firefox is already running. The old Firefox process must be closed to open a new window”.

Affected users confirmed they don’t have the issue when downgraded to Firefox 67.0.4 with Avast software running.

Mozilla’s employee Romain Testard believes either Firefox profile locked dialog issue observed with v67 or launcher process enabled for release users in 68 may have contributed to this.

The issue also reported by affected users on the Avast forum and AVG support site, but the company yet to find the root cause for this. Mozilla is working along with security vendor to find a solution for the issue.

Our thoughts: Since users are not able to start Firefox even in safe mode, we’re not sure disabling launcher process by running Firefox with the command--disable-launcher-process helps, normally, it can be turned off by changing pref browser.launcherProcess.enabled to false in about:config. You can know more about the new process here.

We’ll let you know a workaround or fix to this issue here when available or posted by Mozilla.